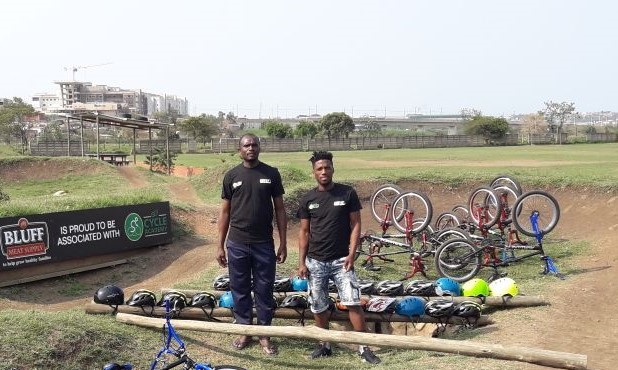 “Nothing is as contagious as enthusiasm” – Samuel Taylor Coleridge.
And nothing could be more true about the KwaMashu Bike Park and how the enthusiasm of the site manager, Brightson Dlala, and coach, Thobani Bhengu, has rubbed off on their community.
Six months ago, Thobani noticed a growing interest from parents asking how they could also learn to cycle like their kids at the GO!Durban Cycle Academy, so he sent out a message on the parents’ Whatsapp group and the response was incredible!
He now coaches 25 mothers from KwaMashu as well as other areas including Pinetown, Morningside and Inanda every Saturday morning while the GO!Durban Cycle Academy members are in tutoring sessions. The effect on the community has been so positive that the parents even ask to ride in the early morning hours before work.

“The moms love it because they can have fun and socialise with their friends while they are riding,” says Thobani. “Even those with health problems want to ride because it makes them feel better,” he explains.
While the approach for teaching parents to ride a bike may be slightly different to the fearless young kids, the result is the same – happy, smiling faces. And now the culture of cycling is spreading throughout the community.
“We can see a change in attitude and the way the bike park has made a difference in the community, all the way from the kids to the parents,” says Brightson. “It is growing faster and bigger than we thought it would. It is making a good impact.”

Thobani was born and raised in Soweto and moved to KZN in 2015 at the age of 20 to pursue a career in the marines, but fate had a different plan for him and led him to Durban Green Corridors in January 2017, where he began working as a bike coach at the KwaMashu site.

Thobani learnt to ride a bike from a young age and his BMX skills were made evident when he made it to the top 16 of the Red Bull Pump Track World Championship event in KZN in April this year.

His skills on two wheels and passion for the youth to succeed are a powerful combination, and he has earned the love and respect of his new community.

“The GO!Durban Cycle Academy is like home to me, it’s my home away from Johannesburg. It’s awesome because there are a lot of opportunities here for the kids.”

Brightson was born and bred in KZN and has been very involved in playing sports as a way of staying off the streets since he was a young boy. He now has three children of his own (aged 13, 3 and 2) and is passionate about sharing the valuable life lessons he learnt from sport with others in his community.

He was previously employed by Durban Green Corridors and joined the GO!Durban Cycle Academy in 2016 when the construction of the KwaMashu bike park was underway.

While Brightson is slightly older than the other coaches, he is young at heart and brings a great level of wisdom to the programme.

“I see my role as being a mentor to the kids, because the academy is not just about cycling, it’s also about helping kids to overcome their problems,” he explains. “It inspires me to work with the kids.”

“Durban Green Corridors and the GO!Durban Cycle Academy have changed so many people’s lives; they give job opportunities for people like me and others in the community. I am very grateful for this opportunity and I hope that we can see the programme growing from strength to strength.”

For more information about how to get involved with the adults programme, please email us at cycle@godurban.co.za.